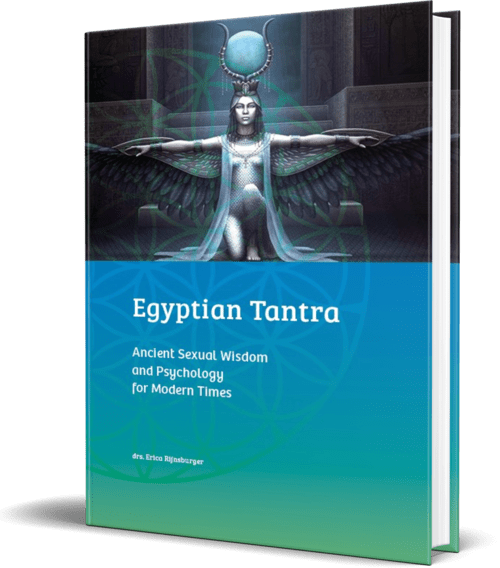 More than once we can be amazed by the scientific wealth of ancient Egyptian culture. Regardless of whether it concerns architecture, astronomy, mathematics, geometry, natural sciences, medicine and healing, agriculture, chemistry, martial arts or philosophy. Egypt and not Greece is rightfully the cradle of our European culture. All the great Greek scientists and philosophers did spend years and years of training at the famous Universities of that time throughout Egypt. Among them were Plato, Socrates, Aristotle, Pythagoras, Herodotus and Hippocrates.

Because the ancient Egyptian culture was a feminine fertility culture, sexuality was high on the priority list of every man and woman. Fertility was seen as a sacred gift of nature, and therefore a gift of the Gods and Goddesses. Each Deity represented an individual aspect of sexuality. Sacred sexuality was practiced by the Goddesses Hathor and Isis. Where Isis brought sacred sexuality into love relationships, the Serpent Power practices of Hathor were meant to reach the higher levels of consciousness and to self-realization by using our vital life force, called Sechem. The way in which they looked at self- realization shows great similarities with how contemporary non-dual teachers speak of essence and realizing essential qualities. At that time, using sexuality to reach enlightenment was largely secret and only accessible to the happy few, who also dared to enter and undergo the intense years of initiation and training. Part of this knowledge eventually took its way to India and the Far East, where it became known under the name Tantra. But the origins lie in Egypt and that which remains and is surrendered to knowledge and practice, can be found in this book.

This book is for sale at bookstores and via the internet. You can also purchase an e-pub or pdf copy of this book for € 6,50. Just send an email to: erica@elenchis.nl.

"All knowledge has been contained as ancestral memory in human cells from the beginning of time. In order to unlock that knowledge according to ancient traditions and initiations as taught in Mystery Schools by Egyptian priests and priestesses, Erica Rijnsburger shows us the overwhelming spiritual wisdom behind it. With ancient Egypt as the original source. Genuine Egyptian Tantra, being the art of utilizing sexual energy to activate the subtler electromagnetic energy in the body, teaches us how to experience, contain and manifest this self-healing and extremely powerful Life-force in body, mind and soul. Known as Qi in Traditional Chinese Medicine, Prana in Ayurveda, Shakti in Indian Yoga, and Orgone or Freudian Libido in European psychology. This Tantric art can’t be experienced without inevitable awareness and thorough self-knowledge, so it’s not to be considered as a ‘quick fix’. But it reconnects us with what we truly and really are: Love, Light, and Liberty."

"Erica has a tremendous appetite for profound Wisdom. Her devotion and studying for this book is a great gift. It could make the world a place again where sex is a sacred experience and definitely a shortcut for everyone who has the longing for wisdom and enlightenment."

Tantra challenges the belief promoted by most spiritual and religious paths that we must suppress or transcend out sexuality to practice  meditation or awaken our spirit, our inner fire.
Let’s go for transcendation.

This website uses cookies to improve your experience while you navigate through the website. Out of these cookies, the cookies that are categorized as necessary are stored on your browser as they are essential for the working of basic functionalities of the website. We also use third-party cookies that help us analyze and understand how you use this website. These cookies will be stored in your browser only with your consent. You also have the option to opt-out of these cookies. But opting out of some of these cookies may have an effect on your browsing experience.
Necessary Altijd ingeschakeld
Necessary cookies are absolutely essential for the website to function properly. This category only includes cookies that ensures basic functionalities and security features of the website. These cookies do not store any personal information.
Non-necessary
Any cookies that may not be particularly necessary for the website to function and is used specifically to collect user personal data via analytics, ads, other embedded contents are termed as non-necessary cookies. It is mandatory to procure user consent prior to running these cookies on your website.
OPSLAAN & ACCEPTEREN